Spent Saturday late afternoon and evening in the ER with my brother, Sunday night he was admitted and early Monday he had emergency surgery. Have spent most of my days and evenings at the hospital. Hopefully, he'll be able to come home by Saturday. When Nin and I have been home, we've been taking care of the orchard, chickens, veg garden, plus all the indoor varmints. We've averaged dinner at midnight the last few days. Absolutely pooped. Needless to say, I'm totally out of the loop as far as reading DW/LJ. About the only thing I've managed is to read Twitter and post a few 'around the hospital' photos to Instagram.

A cousin I met via Ancestry.com had sent me this. My great-grandparents and my grandfather, great aunts and uncles. My grandfather is the second oldest in the photo. 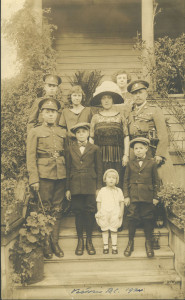 Go hug a Mountie and eat a back bacon sandwich [g]

Allow me to share one of my favourite Great White North episodes: Mouse In A Bottle

Glenn still hasn't found a job, and it's wearing him down, add to that, he hasn't been away for something like five years, so he could really use a break. To that end,

ninjababe and I decided to take him to Yellowstone. Granted, it's just a long weekend, but it's a break. and since I can't really afford to stay in the manner I prefer. we're staying in a -- get this -- tent cabin (the cabin is in Grand Teton Natl Park, but it's attached to Yellowstone for all intents and purposes)!! Now, those of you that know me know I think camping is a hotel without room service (I kid) (a little), so this should be an experience. Whether it's a good one remains to be seen. What is a tent cabin, you ask? Well, it has two wood walls with bunks attached, and the other two walls and the roof are canvas. It has one light bulb, a woodstove, and no running water. Oh, yay! I believe we stayed in something similar at Yosemite when I was like five, but I have little recollection of it, though I do remember the bats; quite fondly actually. No doubt, many hearty versions of the 'bear song' (Nin can explain that) will be sung, and I'll wonder what possessed me, but we leave tomorrow afternoon. Wish me much luck. and keep your fingers crossed that the recent tectonic activity (Colorado yesterday, the East coast today) doesn't spread to the super caldera that is Yellowstone (or here, while we're gone. Our town sits on a fault)(yes, we left California only to move to a town in Utah on an earthquake fault).

Just popping in for a sec to thank everyone for the posts, emails, tweets, and virtual gifts, wishing me a happy birthday. [INTERNET WIDE HUGS]

Mum's making me a lemon tart instead of a cake - yay! - and Glenn's making chipolte marinated fajitas for dinner. I figured that was a good summer dinner, especially as our oven has been broken for a while now (yep, first the dishwasher, then the oven. pray to the appliance gods that the fridge doesn't kick it next!)(I actually miss the dishwasher more than the oven at this point.), so a roast and Yorkshire pudding (which I usually ask for) was right out [g] We either need to use the bbq or the countertop warming/cooker thing or the slow cooker these days.

Nin and I decided to wait a few weeks to see Harry Potter - after all, it's not as if we don't know how it ends - so we'll either go see Winnie the Pooh, or more likely watch DVDs, since I'm not currently feeling motivated to leave the house.

I've turned my mum into a Big Bang Theory fangirl. I loaned her and my brother my 1st season DVDs, not sure it would be something she'd be into, but figured my brother would enjoy it. Then they asked for S2, so I gave them 2 and 3. Glenn was telling me that they're on the last DVD of S3 and mum's pouting because there's no more new for her to see soon. Too funny.

Had two very vivid Iron Man dreams this morning, and after pruning out the weird dream type stuff, I think I'm left with what could possibly be fic ideas! Love it when that happens.

I'm off today, Nin works, but she's off the weekend. New Year's Eve will consist of a variety of appetizer type stuff, plum pudding, and the crackers I bought for Xmas, but never go around to popping. I do miss the Hogmanay Scottish Country Dance party I always went to in Monterey when I was dancing. It was such fun. These days though, it's sitting home eating and watching movies/watching the ball drop on TV. But Nin and I have hopes that one year, we'll be in Scotland for Hogmanay! It's a dream of mine to do it one day. Tomorrow, nin asked for a Southern New Year's Day dinner, so we're doing ham, black-eyed peas(which is a first for me!), spinach, and cheese grits. New Year's Day isn't much of a holiday in Utah, it seems. They'd planned Nin's work Xmas party (they could never get it arranged prior) for tomorrow, and they thought it was odd when she said she couldn't come because it was a holiday with a special meal. Apparently, they're going to reschedule. Reminds me, need to set a timer for the Rose Parade!

Just when you think things are looking up, more crap happens. My brother got laid off from his job this week, and mum's hours were cut back - they work at the same place. Still not sure how finances are going to fall out.

Mum went back to the doctor and has a clean bill of health. They think she had a reoccurrence of the tachycardia she had for years that disappeared about ten years back, which led to a series of events that caused all the problems.

Thanks to all of you for the prayers and words of encouragement -- it's much appreciated! [HUGS]
Collapse